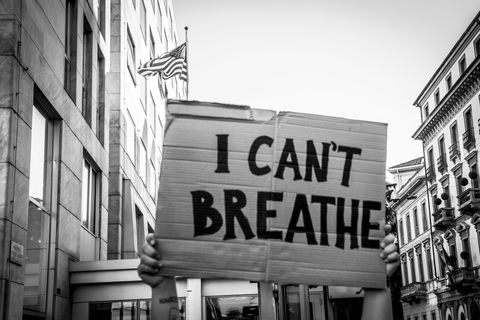 “I can’t breathe.” These were the last words of George Floyd, a 46-year-old Minnesota man, a beloved friend, brother, and coworker.

Floyd, a black man, died on May 25th, 2020, at the hands of police officer Derek Chauvin, a white officer who used his knee to pin Floyd’s throat to the ground, choking him beyond motionlessness for over eight minutes, despite Floyd’s cooperation and desperate pleas to live. Three other officers – Tou Thao and two unidentified officers – backed Chauvin up and held Floyd down while bystanders screamed, filmed, and begged the officers for mercy on behalf of Floyd, to no avail.

George Floyd was being arrested for potentially using a counterfeit bill for groceries. Police video shows that he did not resist arrest.

The four officers have been terminated by the Minneapolis Police Department, but this is not enough. We are demanding the attention of Hennepin County District Attorney Mike Freeman and the immediate arrest and second degree murder charge of all four officers involved in this senseless and merciless killing.